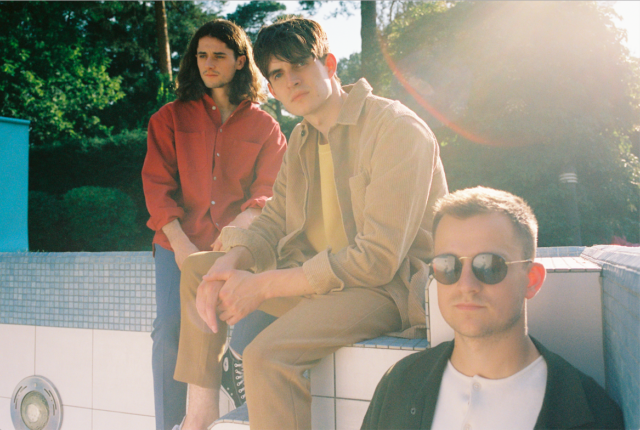 Released earlier this year, Cassia’s ‘Do Right’ encapsulates the serene atmosphere, irresistible hooks and uplifting lyricism that have enabled the band’s word-of-mouth following to flourish throughout 2020 and has become one of their most popular tracks. Now Cassia present a superlative spin on the song with an accomplished new acoustic performance.

Filmed in a steam room at the band’s Casa de Cassia studio in Berlin, the performance is as intimate as they come with the three band members packed into the tiny space. Their set-up is back-to-basics (acoustic guitar, bass and a two-piece drum kit) allowing the song’s quality to shine through, with the trio’s warm vocal harmonies demonstrating just how strong their musical connection is. It provides the ideal vehicle to deliver the song’s message. It’s a timely reminder that making small changes to your life can be an important first step towards personal fulfilment.

Vocalist / guitarist Rob Ellis commented, “We filmed this one in a steam room! We wanted to throw it back to the original ‘Do Right’ vid. If you’ve seen the semi-naked kimono Leff scene, it’s right there. We didn’t quite think this one through though, as it was absolutely boiling. We also did one in a sauna, which is coming soon!”

‘Do Right (Live From The Steam Room)’ is Cassia’s second acoustic video to be filmed in Casa de Cassia after fans were won over by their unplugged version of ‘Don’t Make A Scene’.

Cassia are currently hard at work on more new music, which will follow in 2021 under a new deal with BMG. Their acclaimed debut album, ‘Replica’, was released in 2019.

Cassia have toured relentlessly across the UK, US, Europe and South Africa. In fact, until all gigs were halted earlier this year, they had spent much of the last three years on the road. You’d routinely find them crammed in the van, touring from city-to-city and often spending 17 hours crossing the continent en route to the next gig. The reward was that they earned a following that ignited their streaming stats and wider media profile.

Their sold-out tours have included The Scala in London and a homecoming show at Manchester’s Ritz. Last year, the band played 35 packed festival dates including the Radio 1 Stage at the Reading and Leeds Festivals, All Points East, Truck Festival, Y Not, TRNSMT, Kendal Calling, Electric Picnic and SXSW. Those life-affirming shows resulted in them earning a nomination for Best Live Act at the AIM Awards alongside IDLES and DMA’S.

Cassia promise to start “the biggest party ever” when they’re able to make a long-awaited return to touring. They’re scheduled to play the following dates in April, and plan to embark upon a more comprehensive tour later in 2021.