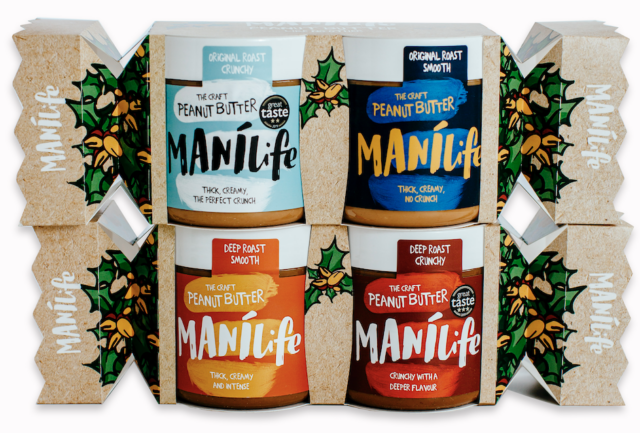 Set to be a huge hit with peanut butter fans and foodies alike, the playful cracker is available in two variants, each featuring two of the brand’s jars and a donation to charity. Finally, a Christmas cracker worth pulling!

ManiLife has also partnered with Campaign to End Loneliness to donate 100% of its profits to the charity for every sale made. Dedicated to ending loneliness and social isolation in later life, Campaign to End Loneliness believes that people of all ages need connections that matter and what better way to spread the love this Christmas than with peanut butter. The charity tie-up is a highly personal one for ManiLife, which has been affected in different ways during the coronavirus pandemic and recognises the important role the charity will play this Christmas.

Stu Macdonald, Founder of ManiLife says: “Loneliness, especially amongst the elderly, is something that the ManiLife team have been forced to face up to this year. Some of us have lost loved ones during lockdown, and others have had to keep their distance from the people who have raised them and made them who they are. Partnering with Campaign to End Loneliness is a small, ultimately insignificant, attempt to make a positive impact on a shared pain point for the whole team, but If we can raise a bit of money and nudge a few people to pick up the phone it will mean a lot.”

But you don’t just have to purchase the cracker to enjoy the flavours, as ManiLife’s range is available to buy in Waitrose, Sainsbury’s, Ocado and independent retailers nationwide (RRP £3.99/295g jar) in four different variants: Deep Roast Crunchy, Deep Roast Smooth, Original Smooth and Original Crunchy.

Different from other shop bought peanut butters, ManiLife has learned from the wine and coffee worlds to elevate its peanut butter from where it was before. The brand is proud to work with their good friends at a single, family run, peanut farm in Argentina to ensure the highest quality and utmost traceability. From there, the peanuts arrive in the UK where they are expertly roasted for a deeper flavour and finally blended, only in small batches to create what many are calling ‘the tastiest peanut butter on the planet’