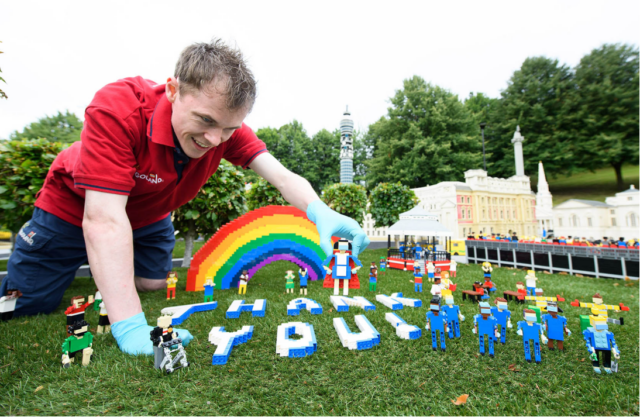 The LEGOLAND® Windsor Resort has dedicated part of its Miniland attraction to the heroes of lockdown as it reopens to the public today.

The new scene, created by the LEGOLAND Model Maker team, features more than 50 handcrafted LEGO® creations of key workers and influential figures from the past three months.

Miniature NHS staff members, including doctors, nurses, cleaners and carers are surrounded by members of the public clapping to remember how the nation came together every Thursday for the weekly ‘Clap for our Carers’.

Also featuring in the new exhibit is Captain Tom Moore, complete with a mini walker made up of tiny LEGO bricks. The soon-to-be knight is flanked by miniature teachers, postmen and the unforgettable dancing refuse collectors who become an internet sensation as they joined households up and down the country trying to learn TikTok dances.

Lunging his way into Miniland is fitness guru Joe Wicks who kept the country active throughout lockdown with his virtual PE classes.

Across the backdrop is a giant rainbow made completely from LEGO bricks, the symbol of hope throughout lockdown.

More than 5,000 LEGO bricks were used to create the scene which visitors can see from today. Will Saunders, who designed and created the new attraction spent over 40 hours to ensure the project was ready for reopening.

The LEGOLAND Windsor Resort, alongside other Merlin Entertainments attractions, will next week be saying its own personal ‘thank you’ to key workers, by giving away thousands of free tickets to its attractions across the UK.

Guests can see the new LEGO Thank You as part of Miniland, where it will be on display until November.