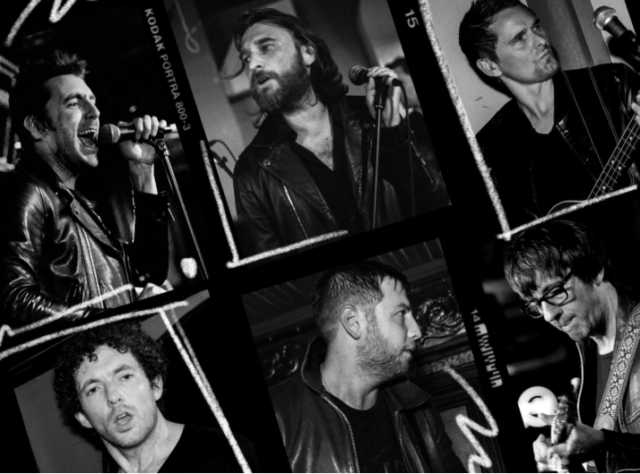 They share a new video today for track ‘Reach Out I’ll Be There’ which features Nic Cester lending his growling rock vocals to the Four Tops’ 60’s Motown track. The video comes as The Jaded Hearts Club also release track ‘We’ll Meet Again’ featuring Bellamy’s vocal on the Vera Lynn classic . They have also announced they will release their debut album ‘You’ve Always Been Here’ on October 2nd.

Davis elaborates on the idea behind the video; “We were due to play a short UK tour in the spring which didn’t happen due to lockdown – so we were all searching for something to feel good about and a way to connect musically – we needed a ray of sunshine.”

Bellamy adds; “Jamie and I were FaceTiming a lot discussing how or even if we could carry on during lockdown, and we kept sending each other links to song ideas.  We eventually stumbled across the legendary live performance ‘Reach Out’ by The Four Tops in Paris in 1967 which touched a deep nerve. It was pure joy, and uplifting energy – exactly what we needed to hear during the darkest initial few weeks of lockdown so we decided to try and do a cover of it somehow with our band members spread across 3 countries”.

So they started work on the track. Producer and bass player Bellamy got the track going with a bass groove, an Ennio Morricone style intro and some orchestration, then passed it onto fellow Muse member Dom Howard who recorded drums outdoors on a mountain in Hollywood.  From there it was passed on to Coxon in London who added some angular guitar work, then on to Cester in Italy for lead vocals.  Bellamy & Cester shared backing vocal duties… Bellamy; “I couldn’t believe how complex the Backings vocals were! It was like Queen with diminished and classical harmonies plus emotional gospel notes bending added so it took a while to work it out”.

Cester was living in Milan (Italy being the first place really hit badly with lockdown measures) and he was stuck in a small apartment with his family. The streets were heavily policed, not letting anyone out for even a walk.  When he finally got to the studio to record his vocal, he condensed all of that emotion into his performance.

Cester; “it was inspiring seeing all of these performances happening on balconies across Milan. It really lifted people’s spirits, so while both recording the vocals  & making the video we wanted to capture some of that unique moment in history”.

The band were formed in 2017 when Jamie Davis, a British guitarist living in Los Angeles who previously ran Coxon’s Transcopic Records label in England, wanted to book a Beatles covers band to play at his birthday party. The cost proved to be excessive and the available tribute acts were drab, so Davis had a back-up plan. “I realised I knew a bunch of half decent British musician friends living in L.A. so I thought I’d ask if they’d come together to form an early ’60s Cavern-era Beatles band.”

They kept their plans a secret. So when family and friends turned up at the party, they were shocked to see an all-star band rampaging through a Cavern Clubera Beatles set. “The place went nuts,” smiles Davis, “and everyone had such a good time that we decided to do it again.”

If their debut gig was a big surprise, their second raised the bar in dramatic fashion after Stella McCartney asked Bellamy if the band would play her fashion show in Los Angeles in January 2018. They arrived to see an A-list crowd gathered to see them: Quincy Jones, Katy Perry,James Corden and even Ringo Starr were in attendance. And then things took a turn for the unbelievable. Paul McCartney strolled on stage, winked at Davis and led the Hearts through ‘I Saw Her Standing There’ and‘ Helter Skelter’. In the space of just two gigs, The Beatles covers band had effectively become the surrogate Beatles.

Things progressed in the same way that they had started. They played SXSW; a late night gig in Chicago after Bellamy had completed a stadium show with Muse; supported Roger Daltrey at The Royal Albert Hall in support of the Teenage Cancer Trust; and headlined London’s 100 Club. Expanding their repertoire to cover other classic British rock songs from the Sixties, the 100 Club show was a tribute to Davis’s late father, with all proceeds donated to the Shooting Star Children’s Hospices. The charity further benefited from the limited edition vinyl only album ‘Live At The 100 Club’.

Back in Los Angeles, Bellamy and Daviswanted to develop the band further and started working on an album, with Bellamy producing at Red Room Studios in Los Angeles. The band decided to focus primarily on recording lost classics from the world of Northern Soul, supplemented by their raw, soulful takes on some famous standards from the era.

“Living in L.A. it seems like no-one has heard of Northern Soul,” says Davis. “We just love the story of how the north of England fell in love with American soul music even after it stopped having hits, and using that music as the soundtrack to a good night out.”

“I read somewhere recently, which made me laugh, that rock is the new jazz,” adds Bellamy. “It’s becoming an esoteric genre, but still with huge historical and cultural importance. Like jazz, which often reinvents old songs, The Jaded Hearts Club is continuing the tradition of how bands like The Beatles and The Stones started out – finding great soul and blues standards and recording them in a more modern style.”

Bellamy and Davis shifted through hundreds of songs as they researched what material they should record for the album. The first taster of the project with Miles Kane on lead vocals was a raucous rock ‘n’ roll take on a Northern Soul classic, The Isley Brothers’ 1962 song ‘Nobody But Me’, recorded in the spirit of The Human Beinz’s cult version that followed in 1968. Then their second offering was the lost Marvin Gaye song ‘This Loved Starved Heart Of Mine (It’s Killing Me)’ as The Jaded Hearts Club gave this 1967 Motown track some renewed veuve with Nic Cester taking lead this time.

The band’s motivation, states Davis, is simple. “It goes back to the purest point of why people started bands in the first place – a group of great musicians getting together to play for fun with no pressure. We’re doing it because we have a bloody good time.”