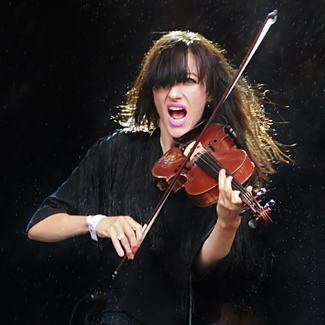 Rock violinist Anna Phoebe has just been announced as one of the judges for Ivor Novello Awards, she will judge the Best Television Soundtrack category.

Anna Phoebe is a violinist and composer on cross-genre collaborative projects, working across science, space, poetry, dance, film and art.

Phoebe who is married to Gavin Esler has toured the world, both as a solo artist and with multi-platinum selling bands including Roxy Music, Trans-Siberian Orchestra and Jethro Tull. She has performed as solo violinist on top international stages and festivals including US arenas, Royal Albert Hall, Royal Festival Hall, Glastonbury, Fuji Rock Festival and Montreux Jazz Festival, and supported Bob Dylan at the Rock Legends Festival in Poland. In 2015 she performed to 350,000 people at the Notte della Taranta Festival with Phil Manzanera, Paul Simonon and Tony Allen in Puglia, Italy.