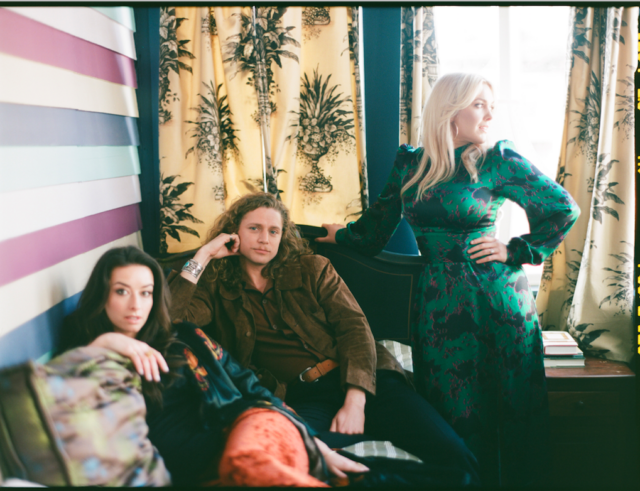 The Wandering Hearts shot to the forefront of the UK folk-Americana scene with their debut album ‘Wild Silence’. Earning glowing comparisons ranging from First Aid Kit to Fleetwood Mac, the album propelled them upon a remarkable journey during which they played some of America’s most storied venues. After a personal invitation from the legendary Marty Stuart, they became the first band to make their US debut at Nashville’s iconic Ryman Auditorium and then play the Grand Ole Opry in the same week.

An early highlight came at the UK Americana Awards, where they won the Bob Harris Emerging Artist Award and performed with Robert Plant, Mumford & Sons and Imelda May. Two years on the road followed, with sold-out headline tours, support slots for Lukas Nelson, Justin Townes Earleand Larkin Poe, opening for Tom Petty and Stevie Nicks at London’s BST Hyde Park, and festival circuits across the UK and US.

The Wandering Hearts headed to the idyllic setting of Woodstock, NY at the start of 2020 to record their follow-up album. The result is that the band are set to make an even bigger impression with their self-titled album which will be released on August 14th, coinciding with the anniversary of Woodstock’s era-defining festival. The band have launched the album alongside lead single ‘Over Your Body’, a beautifully haunting, driving track with harmonies that evoke The Mamas & The Papas.

The trio – Tara Wilcox, Chess Whiffin andAJ Dean-Revington– started writing for the album by drawing on personal experiences. Themes and stories emerged that reflected how they’ve supported each other, both within music and life in general. They’re topics that are universally relatable: life, death, love and fear.

They commented: “Tackling some of these topics can feel very heavy, especially when times seem equally tough, and asking for help is sometimes hard. However, knowing that we’re stronger together than apart is the key. Hope has become the core of what this record stands for and what it means to us. Never losing hope that we can at any moment change the outcome of our future.”

Sonically they touched upon a wide variety of influences, while keeping the focus on their sweet vocal harmonies, melodic leanings and vintage instruments. You can hear echoes of greats from the Laurel Canyon scene – Crosby, Stills, Nash and Young, Joni Mitchell, Carole King– plus their admiration of Fleetwood Mac. They also nodded to artists they grew up listening to, such as Bruce Springsteen and Tori Amos. Despite that respect for the past, it’s equally inspired by the present with The War On Drugs, Lukas Nelson and Arcade Fire also infused in their sound.

To maximise the potential of the material, The Wandering Hearts called upon the expertise of producers Simone Felice and David Baron. The duo’s magic touch had previously inspired numerous acclaimed artists including The Lumineers, Jade Bird and Bat For Lashes. The majority of the album was crafted at thepair’s mountain top studio near Woodstock, NY. It was a location that further fuelled the band’s creativity, from the striking scenery of the local area to the historic instruments, notably a celesta once owned by Thelonious Monk. The result is an album which brims with hope, even in the darkest of times.

The album’s first single ‘Over Your Body’ captures the elegance, beauty and drama that have come to be hallmarks of The Wandering Hearts’ sound. The band describe it as being, “A song about the process of walking away. Breaking a pattern, getting out, and realising that there’s a new horizon waiting for you.”Its accompanying video summarises their time in The Catskills throughout the album’s creation, a three-minute postcard of an unforgettable experience.