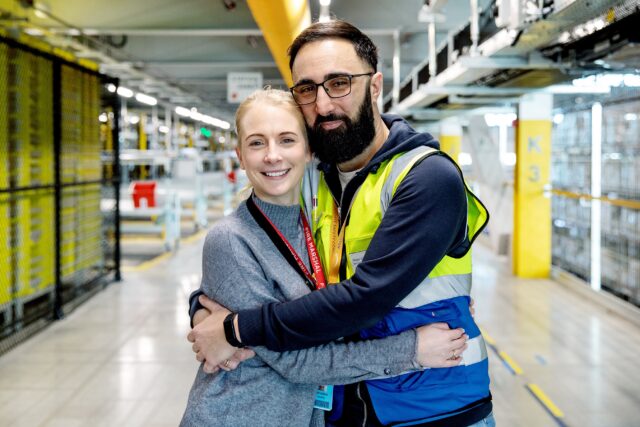 Adrianna and Diego Sabella found more than just a job when they joined Amazon. The Tilbury couple who met and fell in love while working in Amazon’s operations network have been featured in a video which is being shared across the world after it was announced on The Ellen Degeneres Show.

The very first time Diego saw Adrianna was during his interview for a safety manager position at Amazon. During a break in the interview, Diego was waiting in the canteen when he first saw receptionist, Adrianna. He was immediately captivated by her smile but had no chance to talk to her and did not think he would ever see her again.

Faith was on their side and Diego landed the job, joining the company in October 2017. It took him months to approach Adrianna but when he finally worked up the courage, she told him that he must write her a letter asking her on a first date. Diego obliged and they have never looked back.

The couple, who both work in the Amazon fulfilment centre in Tilbury, got married in October 2019. Diego calls their story “a dream that became a reality”.

Adrianna says: “I love that I can always count on Diego’s support and no matter what my day brings, I always feel better knowing he is in the building.”

In the lead up to Valentine’s Day, Amazon was inspired by Adrianna and Diego’s story and have featured them in a global video which is being shared worldwide after it was announced on The Ellen DeGeneres Show.

The video features a lighthearted sketch of an Amazon Scout delivery device and an Amazon Robotics device used in the company’s fulfilment centres, “falling in love”. While the video jokes about robots falling in love, it goes on to celebrate employees who have actually found love while working in the Amazon operations network.

Read the stories of some of these Amazon couples at amazon.com/findinglove.