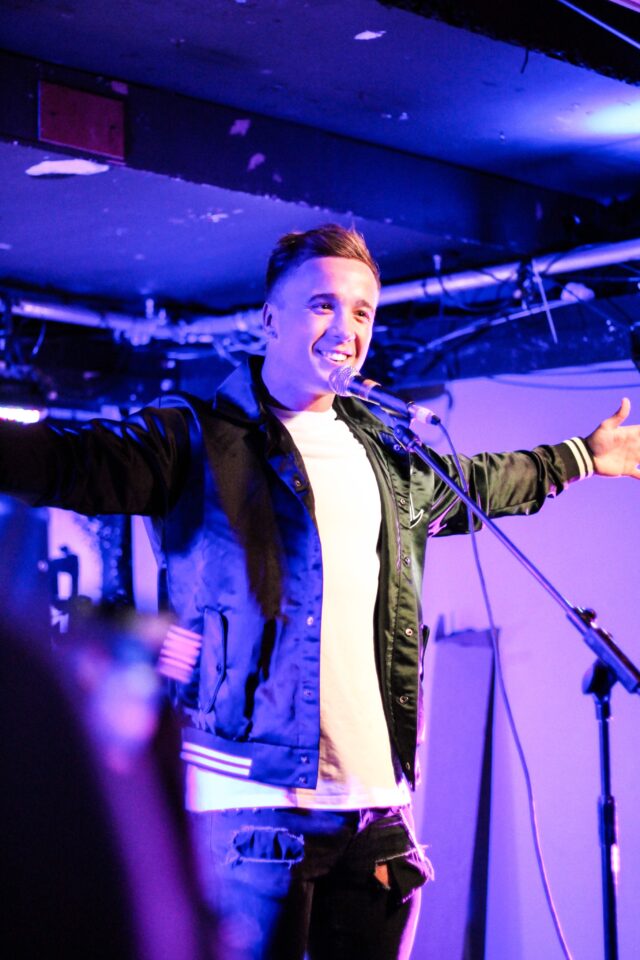 Many of us may know the name ‘Sam Callahan’ from his memorable appearance on the tenth series of The X Factor, when the show was at it’s peak back in 2013.

Since his time on the show, the singer/songwriter’s life has very much resembled the usual whirlwind of excitement that you’d expect of a young pop artist in today’s music industry!

His previous music release, ‘Stitches and Scars’ tugged at the heart strings of Sam’s listeners globally.

In the song, Sam wrote about his own Mental Health related battles following his troubling experiences in the public eye.

Sam said: ‘Stitches and Scars is a song that I created with 100 per cent real, raw emotion at a time when I was probably in the most vulnerable place I’ve ever been.’

Following this release, in December 2019, Sam Callahan also released an album of empowering cover songs by his favourite artists, each with their own inspiring sentiments.

The album was simply called, ‘Sam Callahan – Covers’ and is available on Spotify, iTunes and all the other usual platforms but the young artist has decided to donate 100% of this albums proceeds to the ‘CALM Men’s Mental health charity’.

When asked why he chose The CALM charity and how he decided which songs must go on the album, Sam Callahan spoke of losing close friends to Mental health illnesses in the past and the severity behind talking about our problems as apposed to bottling them up and allowing them to fester.

He says: ‘I was lucky, I’ve been fortunate in the past to have an amazing network of support around me who have helped me through tough times when they’ve arisen. However I’m aware that for so many, that is not the case and I think that there is still a huge stigma around Mental Health, especially when it comes to guys.’

‘A lot of guys don’t want to be seen as weak or struggling, be we’re all human and sometimes all it takes it opening up and off loading some of that heavy burden from your shoulders in order to recover properly.’

Sam is elated to announce that he has now agreed to be a full time ambassador for ‘The C.A.L.M Men’s Mental Health Charity!’

Now what you may not know about Sam Callahan is that performing to thousands of people and creating heartfelt pop songs is not the only way in which the young artist gets his kicks!

In 2019 Sam Callahan infact began his debut into the world of Motorsport!

Sam raced all over the UK throughout 2019 at prestigious and well known race circuits such as Silverstone and Brands Hatch and was even picked by British Touring Car Championship race winning team ‘Team Hard’ to tutor some of their newer drivers to become more capable drivers behind the wheel!

This year Sam is taking part in a whole new race series in aid of, you guessed it.

The series is called, ‘THE ALL PORSCHE CALM TROPHY’ and all profits from the series are donated to CALM and Sam along with fellow social media influencer and ‘Drifting Guru’ Michelle Westby is raising money addition to those profits!

Sam says: ‘When I wrote Stitches and Scars, I was in a super dark place. I’d made some real irresponsible and what I saw as stupid decisions and I was continuously beating myself up about them. It took me so long to open up about my problems, but if I can encourage others to do the same, it will all be worth it!’

Here’s how YOU can now get involved as-well!

By donating just £10 to CALM via Sam’s Just giving page depicted below, you can now send in a photograph of yourself or a loved one to be displayed on Sam Callahan’s race car throughout the 2020 season!

Throughout the year there are races all over the UK, which you can turn up to and get photos with the car and Sam himself and even view your photograph displayed on the racing car as well as of course, being able to catch a great view of some fantastic motor racing!

Sam said: ‘I cannot wait to race in the calm trophy, It’s going to be a positive fun filled way to get a great message out there for a great cause as well as the new covers album that I’ve just released and thew new album of my own music that I will be releasing in summer 2020!’