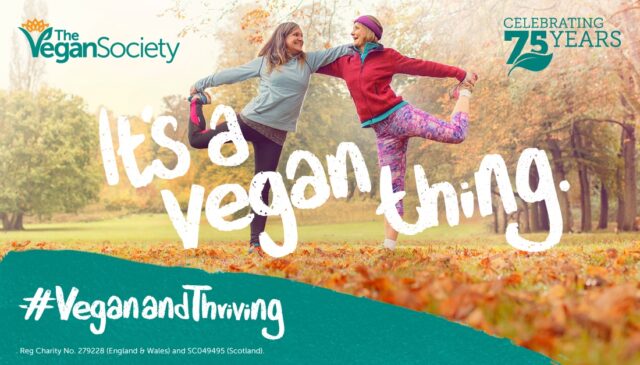 Those who think veganism is a modern fad should think again – this ethical lifestyle choice has just turned 75 this World Vegan Day (1 November).

The special day commemorates the 75th anniversary of the founding of The Vegan Society in 1944 by Donald Watson and friends, who defined the word ‘vegan’ and started modern veganism.

Watson said shortly before he died at the ripe age of 95 in 2005: “It is not every day a movement is born which in its general application could revolutionise mankind.”

The charity started with just 25 members in Holborn, London, in wartime Britain but the number of vegans has quadrupled in the last five years alone to over 600,000.

Louise Davies, Head of Campaigns, Policy and Research at The Vegan Society, said: “It’s incredible that the word ‘vegan’ didn’t even exist until 75 years ago, but can now be seen on menus and products around the world.

“We owe so much to the founding members of The Vegan Society – without them, modern veganism simply wouldn’t be the same.

“The seed they passionately planted has grown widely and quickly, with millions of vegans around the globe now.”

Vegan Society member Loretta Rowe is celebrating her 75th birthday in the same month and year as the charity was founded, and says she has never been healthier.

She added: “It’s great to celebrate my birthday at the same time as The Vegan Society.

“The organisation started long before the public consciousness was even beginning to stir on this vital issue, but it has grown so exponentially in all the services and leadership it provides.”

Loretta became vegan three years ago together with husband Michael, 76, when they discovered the link between dairy consumption and prostate cancer.