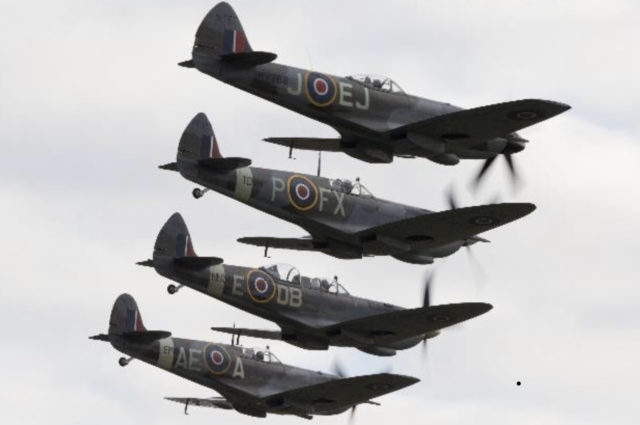 The Battle of Britain Air Show returns to IWM Duxford this weekend, with the site transforming into a film set in commemoration of the 1969 Battle of Britain film. Visitors can expect a mass Spitfire flypast, historic film screenings and vintage makeovers.

Here are the top five things to look out for over the epic weekend:

Watch historic Duxford footage from Imperial War Mumseums’ film archives
Visitors can watch rarely seen films from IWM’s archives, include amateur footage taken by Prince William of Gloucester at the Battle of Britain (1969) film set a RAF Duxford. Second World War footage taken during King George VI and Queen Elizabeth’s visit in 1941, and of the US Air Force’s fighter pilots based at Duxford, will also be screened.

Have a vintage makeover and enter the ‘best dressed’
A wardrobe department will be on hand with aviation-themed costumes to help visitors look the part in IWM Duxford’s film set. Hair and makeup gurus Pretty Me Vintage will demonstrate how to create 1940s victory rolls, while traders will be offering an array of garments, from bomber jackets to boiler suits.

Get lost in the Land Warfare Hall
The costume and props worn by American soldiers in the exhibition hall were originally costumes in Spielberg’s D-Day classic Saving Private Ryan, and the Tiger Tank featured in the film. Further along the Normandy Experience trail, visitors can spot General Montgomery’s campaign caravans, used during Operation Overlord in 1944.

Pick up a Spitfire souvenir
Air show visitors can browse through IWM Duxford’s shops, and pick up anything from a Spitfire keyring to a RAF Irvin flying jacket.