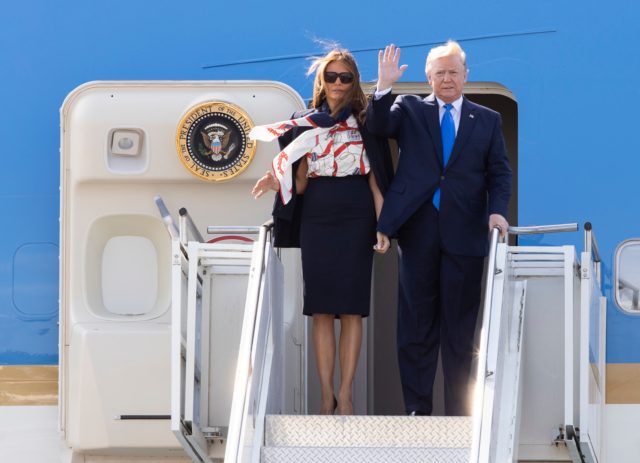 London Stansted Airport has once again welcomed Air Force One, as President Donald Trump arrived in the UK at the start of his state visit to the UK.

Touching down shortly before 0900, the President and First Lady were welcomed by the Foreign Secretary, the Rt Hon Jeremy Hunt MP, who was joined by the Chief Operating Officer of London Stansted, Steve Griffiths.

This is the fifth visit of Air Force One to London Stansted, and comes as the airport reaches the end of a busy week of bank holiday and half term traffic, and additional flights taking fans to the European football finals in Baku and Madrid. In total, around 200 additional flights have operated as a result, with more than half a million passengers passing through the airport in the last week.

The operation to prepare for the arrival of Air Force One involves collaboration between a number of organisations, including Harrods Aviation, the police, air traffic control, UK Border Force, the government, US Embassy and the White House.

“London Stansted is used to handling high-profile occasions, but the arrival of Air Force One brings its own unique set of challenges. This is a huge team effort, and our priority is to ensure it goes as smoothly as possible while keeping any disruption to our airlines and passengers to a minimum.

“It was a pleasure to welcome the President and his family to Stansted, and to have the opportunity to showcase the airport on the world stage. I’m very proud of the teams who have worked so hard to make this possible, on top of the challenges of helping thousands of football fans get to their matches across Europe.”

Air Force One was handled by Harrods Aviation, situated in their private aviation facility on the opposite side of the airfield to the main London Stansted passenger terminal. This unique set-up meant passengers would have been largely unaware of the significant events happening on the other side of the airport, and that disruption could be kept to a minimum.

Air Force One was accompanied by a range of support aircraft, including a back-up aircraft, three chinook support helicopters, two Sea King helicopters, as well as several additional vehicles on the ground.  Around 50 journalists and photographers from across the world watched the President and First Lady arrive, before heading into central London on the presidential helicopter, Marine One.