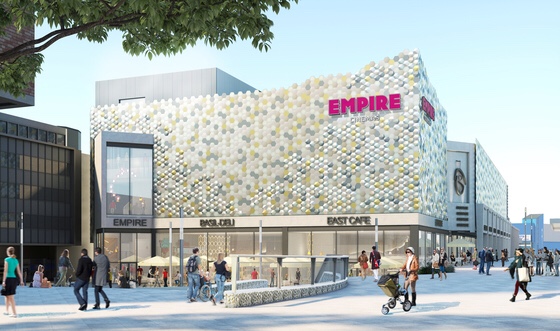 The development of a 10 screen cinema and six new restaurants in Basildon’s East Square has reached another significant milestone after Simons Group were awarded the build contract.

The contract was awarded at a meeting of Basildon Council’s Regeneration Committee on Tuesday 26 February.

The plans for East Square include the 10-screen cinema, which will include the biggest screen outside of Leicester Square, and six new restaurants.

The redevelopment, which also includes significant improvements to the look and feel of the square, will make the area a beacon for leisure and evening entertainment, creating a thriving night-time economy.

Councillor Anthony Hedley, Chairman of the Regeneration Committee, said: “This is a significant milestone in what is an exciting project that will transform the town centre.

“East Square will be a vibrant development, which will bring more life into the town centre while boosting the local economy and providing new jobs for local people.

“We want East Square to become a destination of choice and provide a mixed use town centre. We are committed to creating a much-needed night-time economy.”