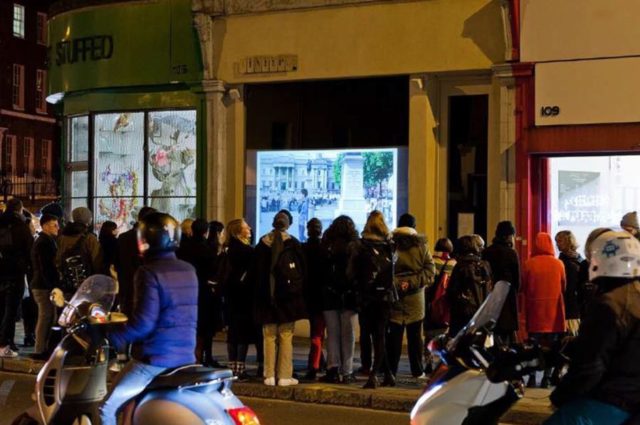 A popular and much anticipated local event, the annual commissions are now recognised for their significance within the ecology of moving image arts in the UK – enabling eight artists each year to make new work. Over the past five years, Tintype has commissioned and produced 40 artists’ films, which are back-projected into the gallery’s window and viewed from the street as a form of public art.

The driving force behind the project is the desire to work with outstanding artists, producing new work that is shown in an unusual context. Whilst the brief is very simple – to make a short film that responds to one London street, Essex Road – the results have been astonishingly diverse. Turning a prism onto a very specific locale has, perhaps counter-intuitively, encouraged a magnificently adventurous response.

For ESSEX ROAD 5, Tintype’s large window, situated on a busy corner in Essex Road, once again becomes a public screen for six weeks over Christmas and New Year, with the eight films screened on a loop every day from 4pm – 11pm.

Essex Road is in the borough of Islington, London. It is roughly a mile long stretching from the Angel to Balls Pond Road. Essex Road runs parallel to its more upmarket neighbour Upper Street and in fact used to be called Lower Road. It has a remarkable number of independent shops and small businesses and a strong neighbourhood identity. It is an area with marked social and economic divisions.