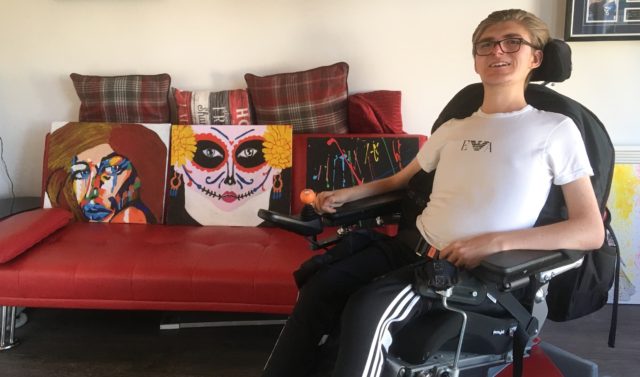 An upcoming Havering artist has been congratulated for raising over £1,400 for Haven House Children’s Hospice by selling his own artwork.

Harry Luxton, 18, from Harold Wood, has Duchenne Muscular Dystrophy which means he finds it very difficult to use his hands as his muscles are weakening. But this hasn’t stopped him from creating incredible contemporary art on canvas.

At the start of this year Harry donated several canvases to Haven House and sold his first two paintings at the Mayor of Redbridge’s Valentines Ball. He sold a further three canvases in quick succession, including a canvas entitled ‘Ziggy’, reminiscent of David Bowie’s iconic creation.

Harry then produced an exclusive print of Amy Winehouse to coincide with the July opening of Haven House’s new charity boutique in Crouch End. The print is available to buy in Haven House’s Crouch End and Romford charity shops and celebrates its links with the Amy Winehouse Foundation which part-funds its music therapy service.

Three of the Amy prints were sold last week at Haven House’s Big Birthday Ball at the Grand Connaught Rooms in London.

Harry began using Haven House in 2015 and has benefited from respite care and transition support which has developed his independence and confidence. Over the years he has been able to have fun and pursue his passion for art and socialise.