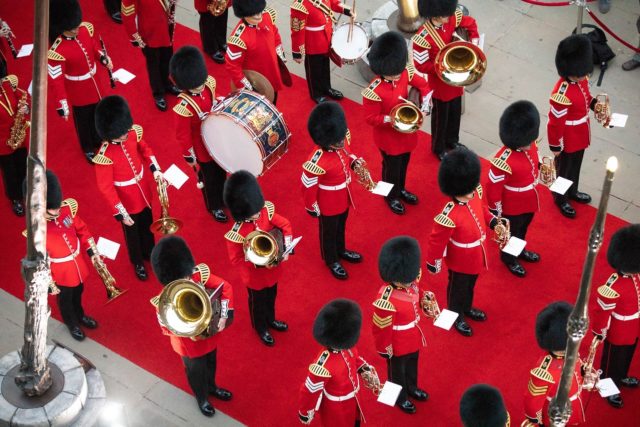 Launched by the Grenadier Guards performing a live rendition of music from the Harry Potter and Fantastic Beasts films, nine giant wands lit up Peter’s Hill in London for the first time as Fantastic Beasts: Wizarding World Wands supporting Lumos opened to the public earlier today.

Head prop maker Pierre Bohanna, who created the wands used in the Fantastic Beasts and Harry Potter films in close collaboration with J.K. Rowling, was at the event and spoke about how it felt to see his props transformed into fifteen-foot models to be enjoyed by the public. “It’s amazing to see something you’ve worked on for two decades celebrated in such an awe-inspiring way,” Bohanna stated. “Each of these wands were born in the extraordinary imagination of J.K. Rowling, and bringing them to life has been a labour of love for Stuart Craig, myself, and all the filmmakers, artists and actors who’ve had a hand in their creation for the films. To now see them realized in truly larger-than-life fashion for fans to enjoy is truly gratifying, and I thank Wild Creations for their wonderful work.”

Beginning today, the giant wands will illuminate Peter’s Hill from 6:45 p.m., with a short light display to music every 30 minutes, and deluminate at 10:45 p.m. each evening until 13th November.

Fans visiting the installation can also attend the following activities taking place at the site each Wizarding Wednesday:

Wednesday, 24th October: Bring your wands and watch wand demonstrator Paul Harris reveal how to cast spells;
Wednesday, 31st October (Halloween): Come and listen to a talk on the wands, with a particular focus on the Dark Arts;
Wednesday, 7th November: Watch a military marching band perform music from the Harry Potter and Fantastic Beasts films.