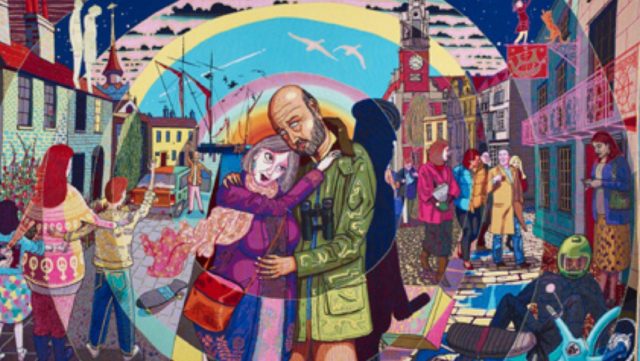 An exhibition of works by the Turner Prize-winning artist Grayson Perry will open at Firstsite in Colchester on 18 November.

Entitled The Life of Julie Cope, the show is made up of works that feature in A House for Essex, the celebrated building designed as a Taj Mahal-style tribute to Julie, described as an ‘Essex everywoman’.

The House is normally used for short-term holiday lets and is not open to the public, so the show at Firstsite represents a major opportunity to see works by Perry that are not usually accessible.

Grayson Perry is one of Britain’s best-known contemporary artists. He works with traditional media such as ceramics, cast iron, bronze, printmaking and tapestry, and is interested in how each historic category of object accrues intellectual and emotional baggage over time.

The exhibition is comprised of four large-scale tapestries that tell the life story of Julie Cope, as well as woodcuts, ceramics and tiles designed for the House, and sketchbooks and photographs that chart its development – a few examples are pictured below and further details are in the attached Press Release.

Even more fitting that Chelmsford-born Perry’s work is being presented in Colchester, the same location that Julie eventually met her end, run over by a curry delivery scooter in a tragic accident on Colchester High Street!