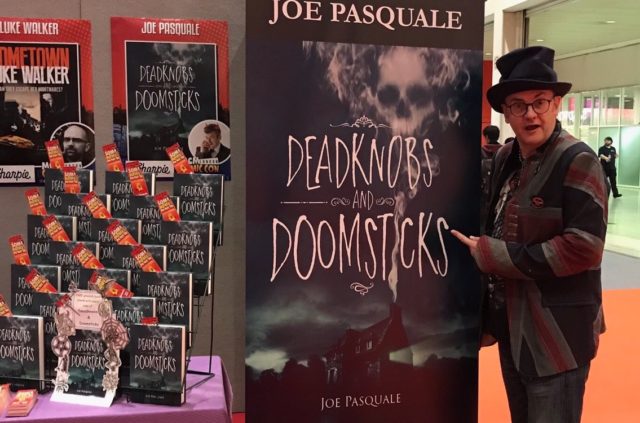 Joe Pasquale’s debut book, Deadknobs And Doomsticks is published in hardback on November 30th by Caffeine Nights Publishing. The book is a collection of short stories also illustrated by Joe Pasquale features an eclectic range of tales many of which have a theme of bullying.

“Some of the stories do have biographical elements.” Joe said

“Many draw from my childhood where I was bullied because of my voice. Ironically, my voice became my trademark which hopefully sends a message out there to other people being bullied that difference is not a weakness but something you can turn into a strength.”

Joe, a keen horror fan and film buff began a creative writing and advanced writing course following the start of an Open University degree on Geo Science which he is undertaking.

“On the flight to Australia for I’m A Celebrity Get Me Out of Here, I picked up a book entitled Feel the Fear and Do It Anyway by Susan Jeffers and since then I have been embracing new experiences. I’ve learned to fly, parachuted, ran a marathon, learned to box. So I thought what else hadn’t I done and writing this book was an extension of the writing courses I was doing.” Joe said.

The stories each accompanied with a water colour illustration by Joe are as diverse as the drawings themselves.

The tales are set in different decades, centuries and in the future, each with a different perspective and twist on life and the supernatural.

Joe’s surreal dark humour purveys in many of the tales which can be read by young adults upwards with a caution about strong language in some of the tales.