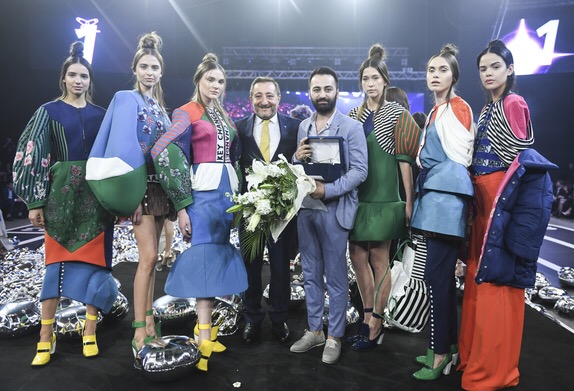 The grand finale, with Mehmet Emiroglu, Basak Koc and Nazlican Karahan making the top three, took place on Tuesday, May 16 at the Volkswagen Arena with a spectacular event.

Organized by Istanbul Ready-Made Garment and Apparel Exporters’ Association (IHKIB) with the support of the Ministry of Economy, the competition, celebrating its 25th anniversary this year, once again introduced young talents to the Turkish fashion industry. KOZA Young Fashion Designers Competition has been organized since 1992 to introduce young talents to the fashion industry.

In this respect KOZA Young Fashion Designers Competition represents the history and evolution of the Turkish fashion industry with an outstanding list of accomplished designers who have previously won the competition. The competition once again brought together young talents seeking to advance their careers in fashion with the industry.

The event, started with the runway show of the ten finalists’ selected pieces from their collections. After deliberation, the jury composed of leading figures of the industry announced the top three winners. Mehmet Emiroglu won the competition with his collection ‘Nihavend’, followed by Basak Koc in second place with her collection ‘Cymatics’ , and Nazlican Karahan in third with her collection ‘Sinirlar/Borders’.

The competition’s winner is awarded TL 20,000 in cash plus the opportunity to study abroad for a year with the support of the Ministry of Economy. With TL 15,000 and TL 10,000 awarded to second and third place holders, respectively, the winners will also be offered free English language education for a year.