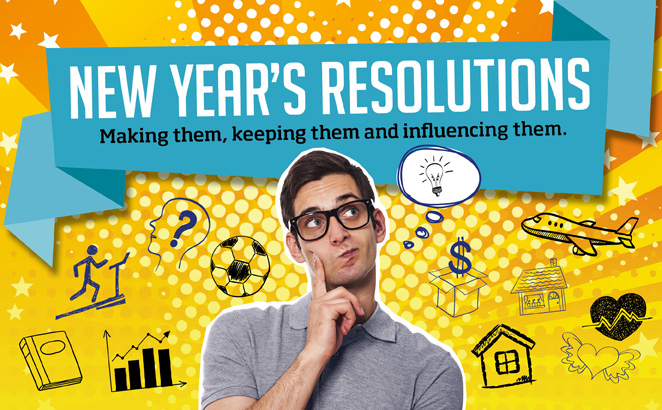 For many people, 2016 was a year of extreme ups and downs, with events like Brexit and the US election seeming to upend a lot of what we know about our world. With so much unpredictability in our lives, many individuals are seeing 2017 as the perfect opportunity to take back control. And what better place to start than the workplace?

A prevalent belief in our modern world is that happiness comes as a result of being successful. Consequently, people often focus all of their energy on finding prestigious jobs, working long hours, and chasing qualifications, in order to make them appear successful in the eyes of the world, with the idea that this will later bring them satisfaction and happiness. However, a growing body of positive psychology research puts this whole ‘happiness follows success’ notion to bed, revealing that it is in fact happiness that fuels greater success and achievement – not the other way around.

In most Western countries and in a growing number of developed nations in the East, we are far richer today than we were in previous generations. Real income has risen over the last half century and we have far more material comforts than ever before – bigger homes, more clothes, better cars, longer holidays – and we live in relative peace and security. But we are no happier for it. Indeed, while levels of material prosperity are on the rise, so are levels of anxiety and depression. On the whole, trends from around the world show that happiness and satisfaction do not improve with greater wealth once countries reach ‘middle-income’ levels.

With this in mind, it is more important than ever before to find ways of managing your mental health. For instance, whereas some people find that attending therapy and counselling can help them to deal with conditions like anxiety and depression, others prefer to supplement these methods with natural products such as can be found at Gold Bee or other alternative therapies. For example, in recent years, there has been great success in using cannabis products to help people alleviate the symptoms that are associated with anxiety and depression. In areas where it has been legalized, cannabis has been celebrated for its potential health-boosting benefits which has meant that cannabis dispensaries like ganja express, Buy My Weed Online, and many others are now able to stock a wide range of marijuana-infused products that people can use as part of their mental health toolkit. Above all, if you are considering using any natural products, it is crucial that you speak to a doctor first, as not everything is suitable for everyone. Of course, marijuana is yet to be legalized worldwide which means that many patients who could be benefitting from it are unable to access this treatment. However, CBD, which is derived from the cannabis plant, is seeing growing evidence that it is capable of treating depression as well as some other conditions. This possible solution is increasing in popularity and has been legalized in more locations which can make it a more accessible option. More information can be found about what are CBD gummies here, but there is evidence to show that they are able help relieve the symptoms of anxiety and depression, amongst other conditions.

A large-scale study in 2015, involving 12,000 participants, was conducted by scholars from Michigan State University and the University of British Colombia regarding correlations between wealth and happiness. The researchers found ‘no trace of a relationship between income and happiness’. That’s to say people who had higher incomes were not necessarily happier, but they were less sad than those in the poorest levels of society. This is in part because a certain level of wealth can make people feel more in control of unexpected or negative events.

In another study, University of California Berkeley business professor Barry Staw and his colleagues measured the initial level of positive emotions in 272 employees and then followed their job performance over the next 18 months. After controlling for other factors, such as age, gender, and intelligence, they found that those who were happier at the outset ended up receiving better performance evaluations, higher pay, and more supervisor support later on. Undoubtedly, one of the reasons that happy, satisfied workers are more likely to achieve better job outcomes is that they’re more engaged and invested in what they’re doing.

The human brain is hardwired to function better when a person is happy, and so a positive outlook provides a chemical edge that helps individuals come out ahead. Positive emotions (such as inspiration, awe, and gratitude) invigorate the human brain by flooding them with dopamine and serotonin. As well as making people feel good, these neurotransmitters help organise new information, retain it for longer, and retrieve it faster afterwards. As a result, people are geared up for better learning, creativity, analysis and problem solving. Greater flexibility and ingenuity in mental processing means individuals can think out-of-the-box and perceive more possibilities, make more accurate judgement calls, and find the best solutions to the trickiest problems.