On 4 December, 2016 Graham Day (44) from Southampton was awarded his black belt in the art of Brazilian Jiu Jitsu (BJJ) by his instructor, Alex De Souza. The accomplishment came despite a debilitating degenerative spinal condition that could have left him in a wheelchair.

Brazilian Jiu Jitsu is a grappling martial art that focuses on taking the fight to the ground and then subduing your opponent through joint locks or strangles. Graham began training BJJ in 2003 and achieved medal success at multiple tournaments. He even competed in mixed martial arts, becoming the BAMMA lightweight champion in 2006.

He progressed through the ranks to purple belt and then his life changed dramatically – in 2012 he was diagnosed with a degenerative spinal condition that left him effectively without cartilage in two vertebrae in his neck & impinging on the nerves.

Graham said: “I had problems for years with my neck and aches and pains ongoing so I spoke to my GP and pushed for an MRI scan which showed that I had this problem with my neck. It took me by surprise as the results were quite serious, I was going to have to have major surgery to have disks replaced. It was a bit of a blow to me psychologically – you have a bit of depression and other things going on which maybe people don’t realize from the outside. But I had to get my head around things and work out exactly whether I could continue or not. My consultant told me that I would probably be in a wheelchair if I wasn’t doing all the sport that I do. I swim, cycle, horse ride, parachute, all sorts on top of my martial arts. He said to me ‘carry on with what you’re doing because it’s helping with your flexibility and your muscles and keeping everything moving.”

Then to make matters worse, a couple of years later his wife Kate started to suffer from severe pain in her lower back, which left her unable to walk and on heavy medication. Graham takes up the story: “within the space of a year Kate degenerated really badly, she was on really strong painkillers, ended up in a wheelchair and I chose to pay for private surgery with my consultant last year to have two disks replaced in her lumbar spine because she couldn’t walk – we were having ambulances out to administer morphine in the end. It was getting really bad. All on top of working and teaching BJJ and trying to look after the family with my condition as well – to top it off we found out that her son, who was in Australia, had to be flown back because he had back pain and it turns out that he’s got a similar problem too! People were saying WOW, you just couldn’t write that story.” For anyone who suffers from back pain, you will know how difficult it can be to do simple tasks. But as your health is important, of course, you will be looking for a solution to help with this. Whether it is visiting a chiropractor, using products like the best CBD cream or doing regular stretches, there are a number of ways that back pain can be managed.

If you find that you are spending a long amount of time each day in front of the computer screen, maybe this is the reason you are suffering. You don’t notice it at first, but slowly, you start noticing your posture changing and the pain getting worse. If this is something you can relate to, it is possible in time to give your old office furniture an upgrade. Specialist companies like Office Monster will be able to assist you with furniture like office desks and chairs. You’ll soon be on your way to improving your posture and find that you are not suffering from back pain as much as you were before.

“It’s a bit weird around our house because there are often discussions like ‘I can’t do that because my back’s hurting’ or ‘I can’t put the bins out’ – but ultimately we all have to get on with it and try to smile.”

Graham and Kate have a daughter, Jess (12) and Graham says it has been particularly tough on her: “she was a little bit younger when things started happening – and she worries about me but I still do all the stuff I do on the whole. Seeing her mum deteriorate affected her a lot more, it was quite upsetting thinking how it must be for a child to see both parents and an older sibling all suffering. She often used to say she just wanted a normal family.”

“Looking back an awful lot happened around that time period. My father had just died and in 2011 we sold our house and moved into a mobile home while I built the house we are living in now. I was lucky that I started that before the diagnosis, because otherwise I probably wouldn’t have taken that on. I was lucky that I had just got that out of the way when the diagnosis came.

“At the same time my wife was busy running her business, Chocolate Muffin Publishing (www.chocolate-muffin.com) which was helping disabled children and children with learning difficulties and delivering creative writing workshops to schools across Hampshire.

“It was horrendous for her and she suffered massively. When you see someone in that much pain and there’s nothing you can do about it, crippled basically. And of course, I know what that pain feels like, but I wasn’t experiencing it constantly like she was, all day long. It was a tough period for her as well but she managed to keep going. We’ve got through the other side of it now, I think, but it’s been a journey! 21 ”

Kate has now had surgery and thanks to her “miracle worker” surgeon is fully fit and well – “I’m the bionic woman!”, but she says she doesn’t know how Graham does it: “He’s in constant pain. He knows he has to have the surgery, but there is probably an element of terror there for him. He’s a brave guy, but training jiu-jitsu is his life – he’ll never give up and will never stop doing what he’s doing.” It is this sort of determination that allows Graham to continue doing what he loves. Not everyone has a passion, but it’s never too late to get into one. You never know if you don’t try. BJJ Madison Classes (if you happen to be around the Wisconsin area) would be a place to start if you want to take up Jiu-Jitsu classes.

“Even on the morning of his black belt grading he came down the stairs doubled over like a ninety-year-old man – but by the time he got to the grading ceremony excitement or adrenaline must have kicked in and he was fine. He even managed to do some sparring afterward, although the wife of his sparring partner and I kept looking at each other thinking “they are both going to break something’ – they were really going at it!”

Graham teaches BJJ three times a week at his own school, ultimatebjj.co.uk, and he travels down to Bournemouth every week to train with his instructor, Alex De Souza. He also still regularly competes and has won numerous medals at purple and brown belt, including a gold medal at the prestigious British Open in 2016 – the largest BJJ tournament in the UK.

Graham says: “I have to completely adjust how I train and how I also fight, how I roll. I try to avoid certain moves where possible. That doesn’t mean I can’t do them or demonstrate them, I just can’t risk it. I can’t risk rolling with really heavy guys, I have to make them start on their backs in my class. If you are giving away 30/40kg then its only fair, and these big guys benefit training in a position they are not used to”

“But I’ve tried to look at all the positives for it, not just for me but for everybody. If I’m injured or in pain, one of the benefits I’ve found of running my own class is that I can tailor the exercises to suit that. So I do an awful lot of drills at the beginning of class for warm-ups which are BJJ specific but are also geared around strength and conditioning and flexibility for the back. I tailor all the exercises as much as possible to cater to this kind of thing and I educate all my guys all the time about the back injury and neck injury and how to protect your spine, so they benefit from that aspect of it as well.”

His instructor, Alex De Souza said of his student: “Graham started training with us in 2003, as a white belt. He has received all his Jiu-Jitsu belts from me and he has fought and won medals at white, blue, purple and brown belt. He can teach Jiu-Jitsu with confidence and competence and deserves to be able to compete against the other athletes in the black belt division. He will represent our club well and with honor.”

Graham plans to keep training, teaching and competing, despite his back injury. He credits his success to the support of his family, his instructor and everybody in the BJJ community. As he puts it: “I don’t think I’ve ever met anybody in BJJ that I haven’t gained something off, whether it be just chatting to them or training and competing. Everybody’s helped me throughout the whole thing, whether students of mine or people higher up that have given advice and encouragement”.

Brazilian Jiu-Jitsu is now one of the fastest-growing sports in the world with over 16,000 people regularly training in gyms across the UK. It is suitable for all ages, both male and female. The governing body is the UKBJJA (http://www.ukbjja.org), which offers insurance, a club directory and a national ranking system for both adult and junior athletes.

Graham would also like to thank the physiotherapists at Therapeutics for keeping his body going and Mr. Dare at the Nuffield Hospital for ‘fixing’ Kates back. He hopes that his story can be an inspiration to anyone struggling with back pain and looking to be involved in sports or maintain a healthy and active lifestyle. 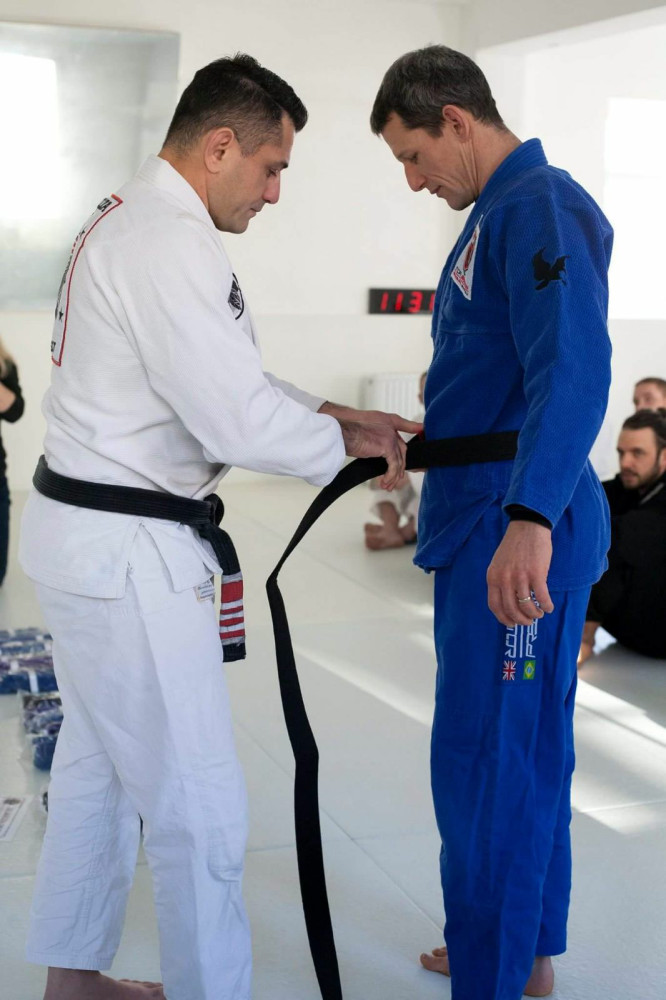