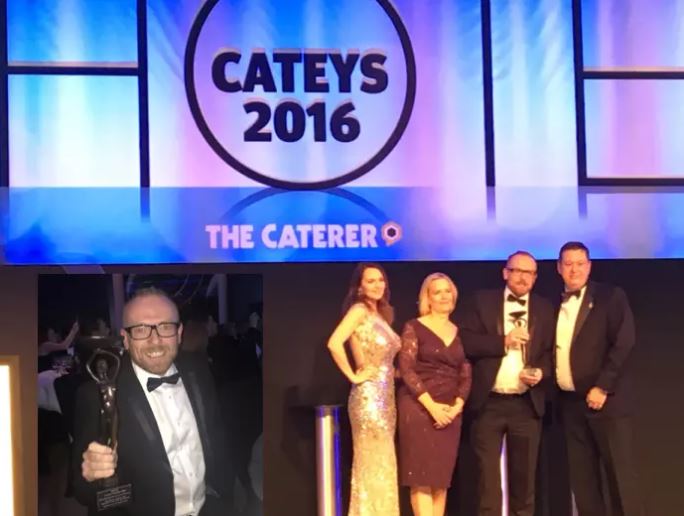 Stoke Park, the luxury 5 AA Red Star Country Club, Spa and Hotel, is delighted to announce its Executive Chef, Chris Wheeler, has been awarded the Hotel Chef of the Year ( over 250 covers) award at the prestigious Hotel Cateys 2016!

Considered the Oscars of the Hotel Industry, the Hotel Cateys were held on Friday 25thNovember at a glittering ceremony at the Park Plaza Westminster Bridge, hosted by actress and impressionist, Debra Stephenson.

The Caterer’s, Hotel Cateys are now in their tenth year, and each year’s awards have been bigger and better than the last.

Since their launch in 2007, the Hotel Cateys have celebrated the most successful hotels, hoteliers and hotel employees across the UK. They were created to recognise and reward those individuals and teams that work tirelessly to make sure their business delivers an exceptional guest experience, day in, day out.

This wonderful award crowns a magnificent year for Chris, who in October also won the ‘Chef of the Year’ award at the Berkshire and Buckinghamshire Life Food and Drink Awards 2016and made his debut on BBC 2’s Great British Menu.

‘We are absolutely thrilled Chris has won this award’, commented Giammario Ragnoli, General Manager at Stoke Park. ‘For 13 years Chris has been wowing our guests with his exquisite cuisine and fabulous personality. Thanks to Chris, Humphry’s, our fine dining restaurant holds 3 AA Rosettes, and Chris’s ability to create outstanding dishes for large scale functions such as our annual The Boodles tennis, has been greatly admired. Chris’s work outside of Stoke Park has been amazing, from working closely with East Berkshire College to encourage students to enter into the world of catering, to cooking up a storm on stage at both the Thame Food Festival and Taste of London, to supporting local food producers as well as raising huge amounts of money for charity. To win the Hotel Catey, which is judged by industry peers and experts, all of whom recognised Chris’s incredible work at Stoke Park and ambassadorship for the industry, is a huge honour and we are all extremely proud of him.’